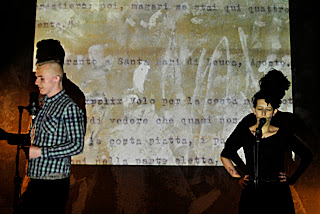 CONCEPT
The ongoing research of sound artist, vocalist and performer Alessandra Eramo explores the interferences between Sign and Voice: writing and sign in their multiple forms, and the human voice as a multi-faceted instrument. Cultural and language interactions have strongly influenced her art, which focuses also on relational aesthetics, action and site specific interventions rather than object-making.

After meeting at the Liverpool Biennial 2012, hosted by Mercy's one day Electronic Voice Phenomena symposium, Alessandra Eramo and London based poet SJ Fowler began a collaborative correspondence of unusual intensity and design. Brought together from across Europe to discuss the new creative possibilities in those art's which approach performance/voice/text/sound/video as one holistic art practise, their collaboration has engaged the full energy of their collective practises, exploring notions of performative ritual, martial physicality, personal historicity and collaborative conceptuality. For Wortwedding, their work will utilise collaborative performance and interactive sculpture alongside a video installation that presents a sixteen day journey through their daily rituals, simultaneously recorded, presented as the heart of a wholly unique and intensive enjambment between two artists whose work together attempts to find shared localities in the compassion of the physical and the gentility of force.

BIOGRAPHIES
Alessandra Eramo is a sound artist, vocalist and performer based in Berlin. She creates text-sound compositions, live performances, videos and installation that have been exhibited and performed in Europe, Canada and USA, among others, at: Italian Pavillion in the World - Venice Biennale, Sonic Circuits Festival Washington DC, Lyd & Litterature Festival Aarhus 2012, Roulette New York,  Festival Bandit' Mages Bourges, Harvestworks New York, Galerie Haus am Lützowplatz Berlin. Since 2010 she is co-founder of the vinyl & sound art production Corvo Records in Berlin. Currently she is conducting her PhD Research at the University of the Arts in Berlin.  Furthermore she is active in educational and cultural programs in Germany.
www.ezramo.com


SJ Fowler is a poet and artist based in London. He has published four books of poetry and has been commissioned for original works of poetry, sonic art, installations and performance art by Mercy UK, the Tate (for the Tate Online), the Voiceworks project and the London Sinfonietta's Blue Touch Paper project. He's performed at festivals and venues across Europe, having been translated into 9 languages. He is the UK editor of Lyrikline.org and VLAK magazine and the poetry editor for 3am magazine. He edits the Maintenant interview series and the Enemies project. He is currently undertaking a PhD at the Contemporary Poetics Research Centre at the University of London. He is also an employee of the British Museum and a martial arts instructor.